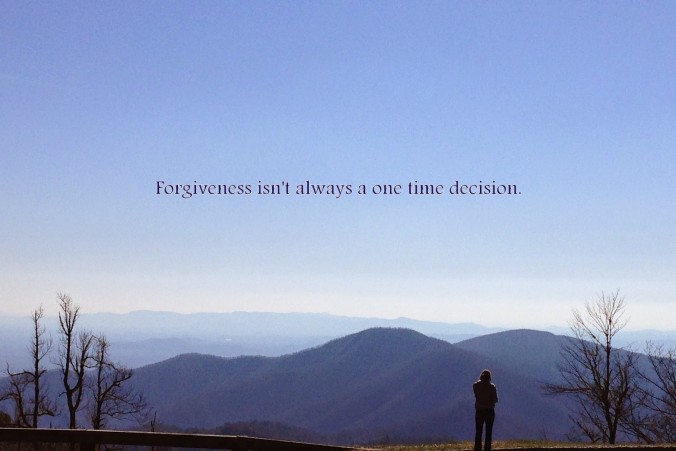 “Get rid of all bitterness, rage and anger, brawling and slander, along with every form of malice. Be kind and compassionate to one another, forgiving each other, just as Christ forgave you.” Ephesians 4:31-32

I’ve never thought of myself as being an unforgiving person.  In fact, I’ve forgiven something so horrible I thought any future wrongs would be a piece of cake to forgive.  You know, like once you’ve climbed Everest, walking up the hill at the entrance to your neighborhood shouldn’t be a big deal.

So, why was this particular hill such a big deal?

Growing up, I both loathed and loved my summer camp’s annual climb to the top of a nearby mountain.  The climb was difficult at times and made up of unsure steps and usually a fall or two.  Probably the worst part was not being able to see an end in sight until you emerged at the top of the tree line.  But when you finally made it to the top, you could look back, see how far you’d come and know it was worth it!

Thankfully, this situation ended much the same way.  I was able to forgive and more than that, I grew in the process.  I know it’s hard to believe, but I actually had things I needed to work on and this helped me see that.  Forgiveness isn’t always a one time decision, especially in an ongoing situation.  Sometimes, it’s a process you simply have to take step by step with God until you can look back and know it was worth it.  I would never have chosen to be hurt and never have willingly put myself in an uncomfortable situation but when I look back on how much I’ve grown, I’m almost thankful the person hurt me.  Seriously!

Unfortunately, we are all going to have hills we have to climb, all have hurts to forgive.   But when we do it with God, it’s doable.  It’s true…”God causes all things to work together for good to those who love God, to those who are called according to His purpose.”  Romans 8:28